The itinerary of the early Renaissance in the Arno Valley entitled  Terra e Tempera (Land and Tempera) leads the visitor into the heart of the art which is kept, or often born, in the territory of the Arno Valley.

The idea for this itinerary originates from the exhibition Tra terra e tempera. pittura e scultura a confronto attraverso i maestri del rinascimento organized in 2009 by the  Museo della Basilica di Santa Maria delle Grazie and the Town Hall administration of  San Giovanni Valdarno.  The aim of the exhibition is to illustrate the significant characters of the early Renaissance, particularly the dialogue between sculpture and painting, through the exhibition of four pieces of work by the great masters: Beato Angelico, Filippo Brunelleschi, Donatello and lo Scheggia, shown in relation to the Museum’s collection which is mainly composed of paintings from the fifteenth century Florentine school including the extraordinary Annunciazione by Beato Angelico.

The itinerary is relevant to  Bucine, and particularly so to the ancient  Badia di S. Piero a Ruoti, where we can see the panel  entitled Incoronazione della Vergine tra i Santi e Annunciazione by Neri di Bicci, son of Bicci di Lorenzo. As we travel along the  Setteponti Road we come across  Castelfranco di Sopra where, just a little outside of the centre, we find the  Badia di S. Salvatore a Soffena  where it is possible to admire several frescoes in the gothic style, but also paintings in the style of the early Renaissance such as  the Annunciazione (inspired by the models of Beato Angelico) by Giovanni di ser Giovanni, known as lo Scheggia. 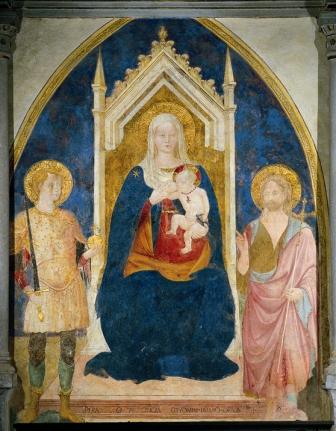 The town of  Loro Ciuffenna also presents the visitor with noteworthy works.. The first can be found  in the hamlet of Montemarciano, where on the main altar of the Santuario della Madonna delle Grazie  a fresco portraying  Madonna del Latte e i Santi Giorgio e Giovanni Battista by Francesco d’Antonio takes pride of place, The second is located in the centre of the town in the Church of  S. Maria Assunta. One of the most recurrent iconographies of the artistic production in the Arno Valley is the Vergine del Latte  (Virgin of the Milk). The most important testament of the iconographic theme is present in the Tempietto Robbiano, realized by Andrea della Robbia commissioned by the Confraternita del Sacro Latte (Confraternity of Holy Milk) kept in the  Museo della Collegiata in Montevarchi. 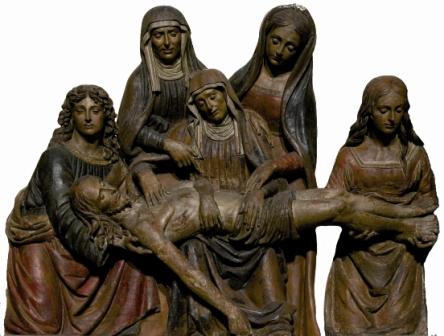 Also in the Pieve di S. Maria a Scò in Pian di Scò the theme of the Virgin is recurrent as is demonstrated by the polychrome plaster statue of the Madonna with Child.

As we continue our itinerary to  San Giovanni Valdarno, home town of Masaccio and lo Scheggia, his younger brother, we find other examples of Renaissance art.  Lo Scheggia painted the frescoes in the right nave of the Church of San Lorenzo portraying the Martyrdom of St Sebastian, St Anthony Abbot on a throne and stories from his life, St Laurence and the stigmata of St Francis, St Anthony of Padua and St Bernardino of  Siena.

The itinerary ends in Terranuova Bracciolini. In the  Chiesa di S. Maria Bambina, which is situated in the centre of the town. It is here that we find a terracotta group  ascribable to  Giovanni della Robbia: Pietà, le Tre Marie e San Giovanni. The work was conceived of as a large theatrical composition, a tableaux vivant, an expression of the religious climate present in the entire valley in the early sixteenth century which  is attributable Savonarola’s belief in the need for lamentation and repentance.  The church of S. Biagio ai Mori is situated within the city wall. The church is from the same period as the foundation of Terranuova. The walls are decorated with fourteenth –fifteenth century frescoes, including  a Madonna on a throne between the Archangel Raphael and Tobias and St Romualdo – Florentine and originally ascribed to Fra’Diamante.