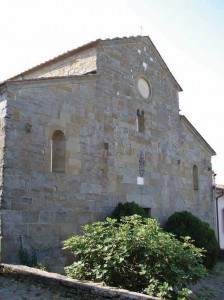 The existing main road of the Setteponti, running on the right of the Arno River at the feet of the Pratomagno mountain retraces a route which was probably originally Etruscan. Here you can admire some of the most suggestive parish churches in the Arno Valley which sprang up along the road in order to govern the country villages.
It was only with the so called ‘road revolution’ of the thirteenth century following the development of the large settlements on the valley floor and the depopulation of the castles, that the main road moved to the left bank of the River Arno.
The parish churches represent a rich example of Romanesque architecture in the Arno Valley, especially with regards to the decorative sculptures.

Coming from Florence the first parish church we meet is the Pieve di Santa Maria a Scò in Pian di Scò, documented in 1008 and built in stages, it preserves a fragmented fifteenth century fresco depicting the Madonna col Bambino on a throne, attributed to Paolo Schiavo.

The current Badia di S. Salvatore a Soffena in Castelfranco di Sopra, dates back to 1392, and has a layout in the shape of a Latin cross according to the Vallombrosan rule. The fifteenth century frescoes in the interior are valuable. These include the Annunciazione attributed to lo Scheggia, Masaccio’s brother, and a Madonna with Child with the Saints Peter and Francis which is instead attributed to Paolo Schiavo. 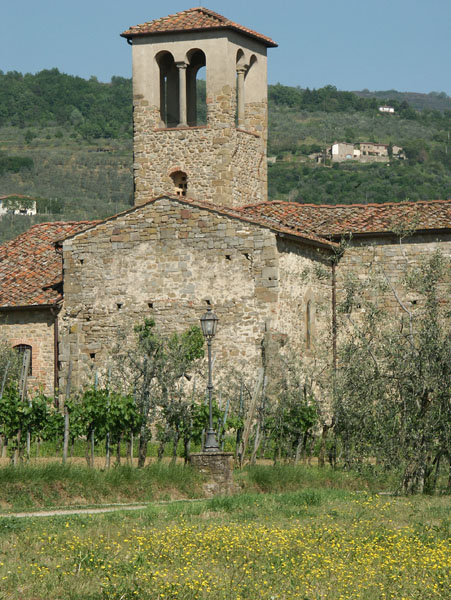 As you enter the town of Loro Ciuffenna you can admire the Pieve di San Pietro in Gropina, the most important example of Romanesque architecture in the Arno Valley. It dates back to 1016 and was built on the ruins of two pre-existing churches. The monumental splendour of the church and the rich iconography of symbolic and phytomorphic elements decorating the capitals make the church particularly interesting. Also in the town of Loro Ciuffenna we find the Pieve di San Giustino, which was restored in the 1960s.

On the left bank of the Arno River going up towards Cavriglia we can find a singular example of a Pieve in San Pancrazio. It is thought to date back to the 8th Century. It is the only example in the Arno Valley of a parish church with an elevated presbytery set on the vaulted ceiling of a crypt. It is divided into three small naves by columns, surmounted by capitals upon which the vaulted ceiling rests. In the interior there was a solid baptismal font. On the architrave of the door which leads from the crypt to the chamber an inscription with the date anno 1147 is still visible. In 1600 it was turned into a Baroque building and in the 1960s was restored to its original form. Not far from here rose the small church of Santa Maria in Avane. It was probably Lombard in origin with some decorations dating back to the 8th-9th Century. For a long period it housed the Annunciazione by Paolo Uccello and the predella, today on show in Florence. The small church was taken apart stone by stone in the mid -1870s following mining excavations.
In Casignano we find the Romanesque church of San Lorenzo- a simple stone building with an apse. If we continue towards Cavriglia we find the Pieve San Giovanni Battista, one of the oldest in the Arno Valley. The building dates back to the year 1000 and has undergone numerous restorations over the years.