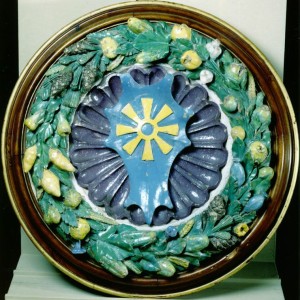 An important port of call to further explore the fascinating world of the Robbian works in the Arno Valley is the city of  San Giovanni Valdarno.

It was right here that the Della Robbia family, in addition to their adversaries the Buglioni family,  left tangible signs of their “arte nuova, utile e bellissima” as Giorgio Vasari defined it.

In this town, more than in any other, we can admire the variegated Robbian production which includes the ecclestiastically commissioned works visible in the lunette in the Basilica di Santa Maria delle Grazie realized by Giovanni della Robbia, and the lay works visible in the formidable gallery of the Stemmi dei Podestà e dei Vicari which adorns the façade of the Palazzo d’Arnolfo which today houses the Museo delle Terre Nuove.

Palazzo d’Arnolfo and the coats of arms attributable to the school of Della Robbia and the Buglioni family.

One of the most outstanding examples is the  Stemma Lioni executed by Luca della Robbia in 1463. Another splendid example of Robbian sculpture is the vivaciously coloured Stemma Tornabuoni realized by Andrea della Robbia in 1479 which has the same aspect as the Stemma Lioni of which it was probably the companion piece.  The Stemma Salviati dated 1484  is also ascribed to the same artist, as is written on the scroll beneath borne by two cupids: the decoration is analogous to the one which adorns the frame of the Madonna degli Architetti, preserved at the  Museo Nazionale del Bargello di Firenze and documented as the first autographed work by the artist.

The of the coats of arms on the façade continues with other artefacts realized by Andrea’s Bottega such as the simple Stemma Ridolfi (1477). That very same simplicity can also be found in the Stemma Vespucci dated 1485. The Stemma Iacopi 1505 was also the product of the same Bottega.

The itinerary continues with two coats of arms ascribable to Giovanni della Robbia, and probably executed during the years he worked on the lunette with the Madonna giving the girdle to St Thomas and placed in the adjacent Basilica di Santa Maria delle Grazie: the  Stemma Nicolini, dated 1509, and the Stemma Pazzi, made in 1516, are very similar in type, a shield inserted in a shell-shaped basin surrounded by a rich garland with plant motifs.

The competing Buglioni  family also left the Town Hall of  San Giovanni Valdarno some interesting coats of arms. Benedetto is certainly responsible for the  Stemma Ginori, dated 1490, and the Stemma di Guglielmo Alessandri. Instead the elegant Stemma Pazzi (1535) is attributed to the Bottega of Santi Buglioni.

The lunette situated in the  Basilica di Santa Maria delle Grazie, over the door of  San Lorenzo, portrays the Virgin while she gives her girdle to St Thomas the Apostle in the presence of the two Patron Saints of  San Giovanni Valdarno: St Laurence and St John the Baptist.

The relief reconnects with the contemporary painting and sculpture, elaborating a sort of hugely effective three-dimensional painting. However, there are conflicting theses as to who commissioned the work.   The  attribution derives from an entry made on the 8th September 1513 in the Registro dei Partiti dell’Oratorio (1502/1528): a reminder to the workers of the Oratory to conclude “Tutto el paghamento della Absuntione sopra della porta […] (al) maestro della Robia”. As a consequence even the dating of the work, previously uncertain, can be placed before 1513.

In Montevarchi, the Museo di Arte Sacra preserves, after an eighteenth century dismemberment, the   Tempietto robbiano della reliquia del Sacro Latte. The Tempietto was the  heart of the Cappella di Santa Maria del Latte, originally constituted by an altar placed against the right counter-façade of the church of the Collegiata and protected by a tall canopy. In a small back room popularly known as  “Stanzino delle Reliquie”, the ‘ Holy Milk’ was kept. The Tempietto was restored in 1970 and faithfully reproduces the original architectural structure. Andrea della Robbia’s work, dated between 1490-1499 was rebuilt by Secchi-Maetzke in 1970.

As we go up the hills we come across examples of glazed terracotta. In Cavriglia we find a small Museo di Arte Sacra, in the Pieve di San Giovanni Battista in Cavriglia. The museum is in what was once the chapel of the Company dedicated to Jesus. Here a series of mainly white busts in glazed terracotta are preserved;  all the busts are ascribable to the production of  Benedetto Buglioni depicting St Giovannino, St Stephen and probably San Romolo Bishop. Of interest is also a candle-carrying polychrome angel also by Buglioni. The upper limbs of the angel were redone in the 1930s. Its presence in the  Pieve di San Giovanni is documented only from the first half of the nineteenth century on.

In Bucine not far from San Leolino we come across the  Pieve di San Giovanni Battista in Petrolo, also known as the  Pieve di Galatrona. In its interior we can admire the baptismal font in glazed terracotta, the statue of St John the Baptist and a tabernacle all by Giovanni della Robbia. These works were mentioned in the nineteenth century by  Emanuele Repetti. They were commissioned by the parish priest Leonardo Bonafede, who was the rector of the pieve for ten years (from 1518 to 1528) to then go on to become Bishop of Cortona.