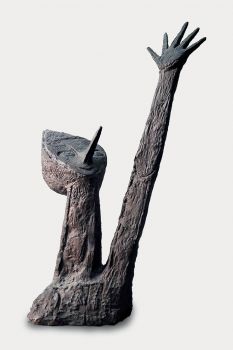 The Arno Valley has a rich history and is home to significant works of art, dating from the early middle ages to the twentieth century, which make the whole territory a museum.
The presence of contemporary art in the Arno Valley has certainly a great deal to do with Venturino Venturi. He was born in Loro Ciuffenna in 1918 and decided to spend his later years in his home town, thus consolidating cultural networks of national importance.

Once he had chosen Loro Ciuffenna as his home, he commissioned the architects Lionello De Luigi and Anne Marie Maheu to design his house which soon became a cultural centre thanks to his many connections, and visitors which included illustrious names such as Mario Luzi, Vasco Pratolini, Alessandro Parronchi and Carlo Ludovico Ragghianti, as well as many others. The presence of Venturi resulted in the creation of the Museo monografico dedicated to him. Many of his works are scattered across the territory, from Murale in memory of the victims of Nazism and Fascism in Castelnuovo dei Sabbioni to Monumento alla Famiglia Umana in Loro Ciuffenna, which earned the  praise of Ragghianti. Since 1993, the year of its inauguration, il Museo Venturino Venturi has promoted cutural events and exhibitions. Today it is part of the network of museums recognized by the Regione Toscana, while the Murale of Castelnuovo dei Sabbioni is a warning to future generations, the house where the artist lived preserves the memories of the more intimate life of the man and the artist.

Il Cassero per la Scultura italiana dell’Ottocento e del Novecento in Montevarchi, is an extremely attractive site which still preserves its medieval charm and today is a museum and centre of documentation for Nineteenth and twentieth Italian sculpture. It collects and acquires materials regarding the sculptors of the period and is a reference point for the numerous plaster cast galleries and museums present in the Region and in Italy. In the spaces dedicated to the vast permanent collection, visitors can admire important works by artists such as  Michelangelo Monti, Timo Bortolotti, Arturo Stagliano, Mentore Maltoni, Mario Bini, Francesco Falcone, Raffaello Romanelli, Odo Franceschi, Antonio Maraini, Firenze Poggi and Donatella (Dodi) Bortolotti. In addition there are sculptures by Montevarchi-born artists Pietro Guerri, Elio Galassi ed Ernesto Galeffi, which belong to Montevarchi Town Hall.
San Giovanni Valdarno is a town which is symbolic of Renaissance art and is also a fulcrum for the promotion of contemporary art. It is here that we find Casa Masaccio. The house, where the revolutionary painter was born, has over time become an exhibition centre. It began its activity at the end of the 1970s with a project which aimed at critically exploring the emergence of Italian and international art. The collection includes artists such as Anselmo, Boetti, Moretti, Farulli, Airò, Bartolini, and Garutti Staccioli. Recently Casa Masaccio has given young local artists the chance to develop and compare their work through workshops, exhibitions and creativity workshops. It has also become a permanent platform of residence for the mobility of national and international artists and curators.